Seeing Auras: Q and A

Your questions about seeing auras, are answered here without the pseudoscience nonsense.

Seeing auras is a lot less startling if you understand what they are.  There are many people who believe that everyone has an aura attached to them, but that only the privileged few can see them.

Actually, it is sort of the other way around.  No one has an actual aura attached to them.  Auras are symbols, created by your mind to help you understand the people who surround you, whether they are family, friends or total strangers.

They are as real as any feedback you get from your senses.  If you saw a double rainbow in the sky like this: 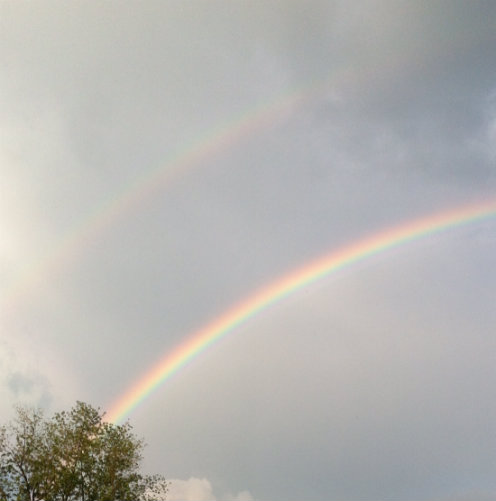 Imagine an aura that feels like a double rainbow.

...would you doubt it was real?

What if you were standing in a crowd of blind people, would you doubt it was real, then?  Your brain interprets whatever images you "see" in a way that only it knows why it does.  There is no guarantee that any two people are really "seeing" the same exact image for anything, because no one can be sure (in fact it seems really unlikely) that any two brains are interpreting an image exactly the same way.

Why Do People See Auras?

A lot of people see them as children, then as they get older, they stop.  Children are more open to seeing them because of the way they view their world- from the inside to the outside.  It goes with a kind of self-centeredness, perceiving everything as an outgrowth  of oneself.

Babies and toddlers know they are the center of the universe.  They firmly believe that they cause everything around them.  We lose this belief gradually as we learn new things.  We start thinking of ourselves as the receptors of stimuli rather than the creators.  Seeing an aura requires an awareness of self (as does most psychic phenomena).  If you are not more aware of your "self" than of the world around you, you will not see an aura.

So, how do people spontaneously see auras?

Generally after they experience some kind of trauma or earth-shattering event, something that makes them hyper aware of their "self".  It could be a physical experience, like a car accident, a near-fatal illness, or having a baby, or it could be an emotional experience like losing a family member or falling in love.  These experiences change people, so that they are more sensitive for a time.  And it is this type of awareness that stimulates seeing auras.

Can auras be photographed?

No, they cannot, not any more than a thought or a feeling can be photographed.  That does not mean they aren't real, it just means that if you bought an aura camera or software, you've been ripped off.  The effects from these devices are mostly produced by conductivity, affected by varying amounts of moisture on and around the subject- humidity, sweat, oils, bacteria, etc.

Is Seeing an Aura, a Warning?

Sometimes.  If there is an important need to know something about a person, you may see an aura.  The most common "warning" type of vision is when you see a white aura.  But if you are just going to rely on your mind magically knowing when you need to "know" something about a person, you will be disappointed.  Your brain is not really actively making those decisions about which sensory data to deliver to you, and which to just store.  The fact is that humans only access a fraction of the data our brains receive.  It's like a super filter that screens out large amounts of information, so that we can comfortably live in a limited physical world.

There are ways to access this information deliberately, or bits can slip through when people are at a heightened level of awareness.  But your brain has no mechanism for deciding what's important or what's not for these "extra" bits.  After all, it was pre-decided that none of it was important to begin with.  So, any time you see an aura without deliberately trying to, it probably won't be a warning and it may in fact be a good sign. Unless you have a strong negative emotional response to seeing auras, they are not warnings.

Can an aura color have more than one Meaning?

Yes, for several reasons.  Colors can have different shades, and this can change the meaning a lot.  But also because aura color meanings are personalized.  Everyone has there own set of symbols and colors are part of that.  There are sometimes commonalities, but its best not to rely on one set of general definitions for the meanings of certain colors.

And there are also times when there seem to be contradictions.  You'll see one color for someone, put it together with what you know about the person and come to a conclusion about what the color means.  But then, another time you will see the exact same color for someone whose thoughts, desires, actions and motivations are completely different.  It is up to you to work out the whys of that situation, come up with an explanation that fits both people, so that the apparent contradiction disappears. Seeing auras is a little like solving a puzzle sometimes.

Do you have to rely on others to tell you about your own aura?

No, not at all. It is possible for anyone to see their own aura, even if they have tried and failed in the past. Understanding how to see your aura can lead you to many other psychic breakthroughs, as well as providing you with useful information.

As far as what others tell you...consider the source. If it is someone you trust and someone you know has been accurate about other psychic information, then that's fine. But its always better to know for yourself.

This Q and A is aimed at demystifying the experience of seeing auras.  They are a useful tool to deepen your knowledge of the people around you.

If you want to ask a question, use the form below- no names, no emails needed.