The 10 of cups contains more than a simple tarot meaning.

It is a psychic tarot revelation.

This tarot card is usually described as the only, undoubtedly positive card in the deck. Its all about the virtues of love, peace and general well-being. But it is more than that.

Yes, this is the big win, for all the marbles. It is not an accident that the cups resemble trophies, nor that they are displayed in a triumphant arc. So, what does victory look like?

Well, it looks a lot like normality. A nice setting, no mayhem, a normal-colored sky, a house which would be suitable for any suburb, etc.. Its just somewhat...underwhelming at first glance.

A deeper look at the 10 of cups reveals that it is not quite game over. For starters, the ten of a suit is only the highest one of the 'common' cards in that suit. The court cards (jack, knight, queen, king and ace) are still to come. So perhaps this represents the highest victory a commoner (someone who did not wield a great deal of psychic power) could hope for?

The picture of the 'family' on the 10 of cups needs some scrutiny. It is generally believed that the figures represent a couple, with their son and daughter. The fact that the boy's coloring is exactly like the man's, and the girl's coloring is exactly like the woman's is taken as confirmation of this. The shading though, seems too exact, such as the folds of the fabric of their clothing and the color of their hair.

Sometimes a tarot card tells a story (instead of showing a snapshot in time). We are accustomed to reading or looking at pictures from right to left. But what if the narrative sequence or passage of time is shown from right to left? Could this be the case with the 10 of cups?

What if the boy and girl are not the couple's children, but younger versions of themselves? Notice that the man and woman are watching, hailing and celebrating the 10 of cups rainbow in the sky, while the children are oblivious to it...dancing and carefree, but completely wrapped up in themselves, not looking at the rainbow (or at their supposed parents). It is as if they are the only beings in their world.

This makes sense if the children are in the past, and the adults are in the present...where the 10 of cups rainbow is happening. Note also, that the house appears to be some distance from the adult couple. However, it is located directly behind the children. If the normal(ish) surroundings represent the past, and the 10 of cups rainbow appears in the present, then it might be foreshadowing an amazing future where everything is attained.

The rainbow displayed in the 10 of cups is the key to understanding the joyous nature of this tarot card. It shines with radiant light, reflected most in the piece of sky centered somewhat below it. (The sky which is below and to each side, is somewhat darker.) This is no ordinary roy g biv rainbow. 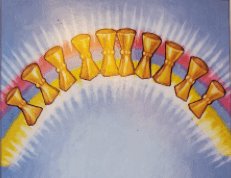 Red, yellow and blue (which are traditionally considered the 'primary' colors) remain in the 10 of cups  rainbow.

But the only non-primary color that is still in the tarot rainbow is violet. So, it looks like r*v*b*y (or red ->violet->blue->yellow).

The most important thing is that the end result is JOY.

The infinite 10 of cups path

A path in a Tarot card usually symbolizes your PATH (of existence. Notice that the children in the picture are dancing around, each with one foot on, and one foot off the path. The adults, however, have both feet firmly planted on the path (although her long dress obscures the woman's feet).

This implies that the couple is now exactly where they should be, in the midst of their joy. Their victory has been achieved (although their path goes on). Interestingly enough, there are actually two paths on the ten of cups tarot card. Can you see the other path?

It is the river or creek that flows downhill from the house.

The first noticeable thing about these two paths is their color symbolism. The road is masculine and the river is feminine.  A succinct explanation of this symbolism can be found here. These two paths have not yet intersected, but it is clearly implied that they will at some point. The paths follow the same general direction, but they are not parallel. So, the interesting question is...what will happen when the beginning (the river) meets the end (the road)?

What the 10 of cups path shows, is a snapshot in time. Everything is frozen in this everlasting moment. The light from the ten of cups rainbow illuminates the spot on the path where the couple is now. Everywhere else is shaded darker. That is because it is this moment that is important. Focus on the NOW.

This card, whether it is used in a working of divination, meditation, contemplation or communication, is meant to call your attention to the nature of joy, and the to nature of time. If you are drawn to this card in some way, physically or mentally, understand that it is important for you to stop whatever you are engaged in, until you deal with its message for you.

There are no precise instructions for you to follow with this tarot card, though. The 10 of cups (like all tarot 10's) is a marker, something to make you pause and consider the state of things.