The five of coins tarot card does NOT have to be as bad as it seems on the surface.

But these ignore the two-sided nature of all tarot cards.  (Is the glass half-empty or half-full?)

The meaning of this card, and of all of them, depends on what you see when you look at it.  Even though the people in this picture are experiencing horrible deprivations, there is hope there for those that can see it.

So, let's try to get to the real meaning of the five of coins tarot by some psychic manipulation  There  are three obvious elements in this picture.

They are:  the woman, the boy, and the tree of five coins.  Each one plays an important role in the meaning of the card.

The best way to figure out what these roles are is to eliminate each, one at a time, from the image and assess what remains. 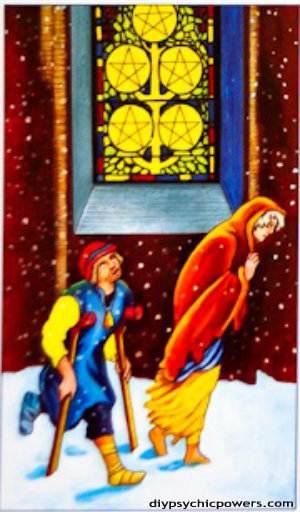 This psychic powers exercise (and all others here using tarot cards) applies to the Rider Waite tarot deck.

1.  Relax your body, keep still and think all the everyday thoughts that normally crowd in when you have the time to relax.  Get them out of the way now.

2. When nothing else pops into your mind, look at the five of coins- either the actual card, or scroll up to the picture.  Look at it for a few minutes.

Don't try to think about its meaning, though.  Just look.

Then look away, focus your gaze on something else.  Then let your eyes return to the tarot card.  Keep shifting your attention back and forth, a few seconds at a time, until you have the image of the card firmly in your mind when you are not looking at it.

3.  Now, using a "scanning" technique, eliminate the woman from the picture.

4.  When you have removed the woman from the picture (replacing her with a continuation of the background) view the resulting image.

You only need to hold the image with the woman missing for a second or two, just long enough to get an impression of how this picture makes you feel.  Write down the words that express how you feel.

5.  Replace the image, strip by strip, starting from the top.  (Always put things back the way they were when your visualization work is over.)

6.  Repeat the exercise, removing the boy instead.

7.  Repeat the exercise, removing the five coins or pentacles.

What is Your Psychic Reading of the Five of Coins Tarot?

It is impossible not to feel the difference in the card when a main element is removed.  When you take away the figure of the woman (a figure of despair) what is left?

When the boy is removed from this tarot card, the meaning changes to a more negative one.  Some of the words that could be associated with the changed picture are:  bitterness, wealth vs. poverty, indifference, hoarding, heedlessness, sorrow, indignity, refusal and blindness.

You will have your own impressions about the revised meaning, and there are many different aspects to consider.  Just touching on one, it is hard to imagine that anyone could be so oblivious to the positive power of that tree of coins as the woman in the card.  She has access to that power within her grasp.  She is too wrapped up in her misery to see that it is there and that by just reaching out to it, her whole life could change for the better. An even more negative view is that she is deliberately rejecting hope.

And when the five of coins tarot tree is eliminated from the picture, so is all hope for both characters.  There is also no more juxtaposition, magical power, illumination, or transparency.  The light is gone and the world looks cold, dark and shrouded in mystery.

This card can be used as a guide to your own development of psychic powers.  Are you aware of the signs and symbols around you, or are you blind to them?  Do not be surprised if, after doing this exercise, you become more aware of things that others are ignoring.  Use your feelings to steer you.  If something seems significant to you, then it is important.

After you do the five of coins tarot exercise, try some of the other exercises (listed under tarot teachings, above on the left).  Not all at once, give yourself time to absorb their lessons.  You will be amazed at how they will expand your psychic abilities.

Like all the tarot cards in this deck, the five of pentacles contains secret symbols that are simply shapes embedded into the image.

These shapes will subtly influence your feelings about the card, even if you do not consciously see them.

The arrangement of the coins in the five of pentacles uses some of these symbols.