Yes or No Tarot
Exercise

Yes or No tarot is a very, very old esoteric tradition. It is similar to the one card tarot, in that it is simple, easy and quick to perform.

However, it is NOT a reading.

Instead it is an exercise that is designed to teach you an important psychic truth, and stimulate your psychic senses so that you can move further along in your path.

Many sites provide their visitors with a clickable, instant yes or no tarot reading. You simply ask a question (that has a yes or no answer) select a card (typically only the major arcana are used) and an answer appears on the screen. There is usually some explanation of why the answer was either yes or no, and that completes your reading.

There is nothing wrong with simplicity. Complicated spreads are just designed to look impressive, NOT to decipher added meaning.

But, this yes or no tarot reading is not tarot, nor is it a reading.

It is also not a reading because the answer/interpretation is predetermined, randomly selected by a software program, or both. Are you really even picking an image? Does the place where the cursor lands on the screen really correspond to a certain image? There is no way for you to know.

And of course, the yes or no answer and interpretation are prewritten code, preselected, with the question you are told to focus on having no influence whatsoever on the result. A magic eight ball would give you a more psychic response- at least you would be touching it. 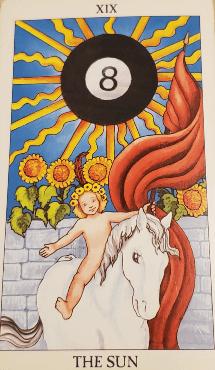 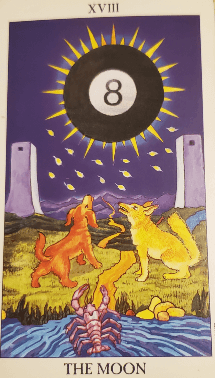 
Computer-generated yes or no tarot is just a game.

How to learn from yes or no tarot

Tarot was designed to give you the information that you are able/ready to receive. It is very individualized and personalized. As you practice with the deck- meditations, readings, exercises- you come to understand one basic truth. EVERY card you choose, no matter how basic or complicated the spread, represents YOU and no one else. (So the idea of pulling a 'significator'' to represent you is absurd.)

Lets assume you have an actual, physical tarot deck on hand. Do your meditative preparations, but instead of meditating, hold your tarot deck for a few moments with your mind blank.

A suitable (yes or no) question should pop into your mind.

What type of questions are best?

1.  When you first start doing this exercise, reject questions with subjects that are important to you. (If you care about the outcome, do not use that particular question.) Something trivial would be best. For instance, when you are new to this exercise, "Will I see a yellow bird today," is a better idea than, "Will I meet the person I will marry today?"

2.  The question should also be one in which you believe that either outcome is possible. So, "Will it snow today," will not work when you are in Florida, in July.

How many cards should you choose from in yes or no tarot?

1.  As many as you want- divide and classify the deck however you feel like doing. You can go by arcana, suit, face numbers, predominant colors, cards with flowers, cards with only men (or women), or any other way you decide to. It does not matter at all.

2.  Just use the whole deck- there must be a reason there are 78 cards in the deck. (still does not matter, though)

Which cards mean 'yes' and which mean 'no'?

Well, that is the main lesson that this exercise will teach you.

You have to figure that out for yourself. Only you can tell what meaning an individual card has for you; no one else can do that. That's one component. Another, is that the meaning of tarot cards is fluid. A card may not have the same meaning to you at different times. In fact, it probably won't.

Tarot cards are a tool. They are like a mirror for non-physical attributes, but you are the person reflected there. And, like a mirror, your reflection changes from moment to moment. Changes can range from almost imperceptible to very drastic (depending on what is happening in your life).

So the cards themselves do NOT have an absolute, fixed meaning. (This is another lesson that this exercise teaches.)

No, there are no 'maybe' cards.

But, gray areas exist surely? After all, the tarot cards can change their meaning, right? What if they are in the process of changing from 'yes' to 'no', or vice versa?

Look, you set the parameters for the exercise, by your decision to participate. You said it was 'yes' or 'no'. There is no 'maybe' in the title.

Besides, everyone agrees that the goal of yes or no tarot is clarity.

Why muddy the waters by introducing a 'maybe' factor? So another truth is, that if something can only lead to confusion (rather than clarity) a source that advocates it, probably should not be trusted.

Yes or No tarot- the main lesson

The most important conclusion that should be drawn from the yes or no tarot exercise has to do with the nature of tarot, and your psychic awareness.

What are tarot cards?

Tarot cards are a tool to focus and amplify psychic power. They are not a source of anything. The psychic power displayed in a reading (or exercise) does not originate from the cards.

Whether a tarot card signifies 'yes' or 'no' depends entirely on what an individual sees in it. Different people can look at the same card and see different things. (Or they can see similar things.) It does NOT depend on the card drawn. It depends on the individual doing the exercise. The cards are just the means by which YOU express the answer you already know.

Don't believe me? Get some tarot cards and do the yes or no tarot exercise a few (dozen, hundred, thousand) times. Eventually, inevitably, the lesson will be understood.