Learn info tarot secrets for gaining better understanding of the meaning of the cards.

These are"info tarot secrets" because those who know about them generally don't talk about them, except to pass them along to the next generation.

Most tarot readers (and a bunch of new age tarot creators) do not realize:

Simply knowing this information will boost your psychic awareness.

How do tarot cards work?

There is a part of your mind that most people are completely unaware of.  Which makes sense, because it is usually silent, and does not make its presence felt.

It does not communicate verbally...English (or whatever your native language is) means nothing to it.  But even though it is generally quiet, it is aware of its surroundings.  And when it recognizes its language, it gets excited and it communicates that excitement to you.  You can feel it then if you are not distracted.

Its language is symbols.

Tarot cards are rich in in the symbolism we are accustomed to, but beyond this, they are also filled with the symbols that our "other" mind understands.

Tarot enables both parts of your mind to connect and interact.

It does this because both parts of your mind are focused on the same image.  What they 'see' may be entirely different, but at least distractions are muted, so that some communication is possible.

Tarot cards can aid in your psychic development by forcing you to 'listen' and understand the info that you have been ignoring until now.

Tarot card pictures are forced to display a kind of dual symbolism to communicate information.  For example, take the six of cups: 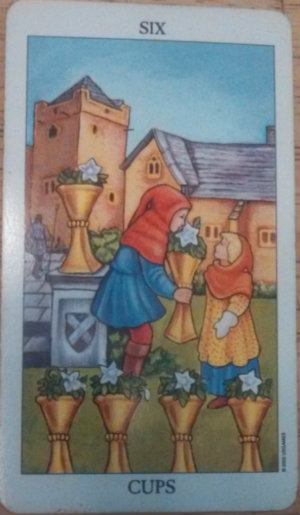 Tarot reading how-to guides say the 'theme' of this card is sweetness, kindness, charity.  They speak of a return to childlike innocence and unselfish happiness.

But that interpretation is not really derived from the symbolism of the card; that stems from the card's imagery.  Imagery is important, but it is not the whole story.

Embedded in every tarot card are secret symbols, ancient ones that give added depth and meaning to the card.  Without understanding them, a real tarot reading is impossible.  The interpretation is just too shallow.

So bearing this in mind, and taking into account another piece of information...that all tarot cards have more than one possible meaning, do you see anything that does not fit the picture of sweet, idyllic innocence?

Yes, of course, the man in the background.

He does not fit the traditional narrative.  Some tarot experts explain this figure by noting that he is walking away.  Given that he is a soldier or guard, they say he is a symbol of the defeat of aggression by love.

But, why include him at all, then?

Wouldn't the tarot card convey the same message if he was not in it?

Let's see if this figure makes a difference.

Whether you believe you have psychic powers or not, you will have noticed a difference in the way you felt when this figure was removed.  This detail is necessary info for the tarot card, because it is a symbol.  The symbols in tarot cards are shapes, and this figure is walking away because that is what is needed to achieve a particular shape.

Most tarot teachings say that cards placed in specific positions relate to their meaning for the past, present or future.  Predetermining a meaning for a tarot card is not the best way to get the info you need.

Complex layouts are popular, but they are an artificial constraint.

Real psychic tarot readers know that the cards are a snapshot for any given moment.  The meaning is contained in the card(s) not in where they are placed.  If the query is related to the past or the future, then that will be the information you get- but there is no reliability in forcing the tarot cards into a pattern where you set the rules.

So, another info tarot 'secret' is that tarot cards always relate strongest to the present, the actual moment when you draw the cards (unless you are specifically asking about another time).

The key to understanding them is to realize that whatever you think or feel is right.  Your mind will automatically focus on the details that symbolize what you need to know.

For experienced psychics, this process is almost automatic.  For those who are just beginning to develop their psychic powers, it can take awhile.  Don't force it, you will know when your interpretation of a card is correct by how you feel when you say whatever you think it means.  As you gain confidence, it will no longer be the third or fourth thing (or the fifth or sixth) but the first or second.

If your eyes seize on a detail on the card, go with it and look mainly at that, ignoring everything else.  Your mind is telling you that it is important.  Always trust your instincts!

At some point, after you've experienced this automatic focusing a few times, a weird thing will happen.  Your vision will expand the detail, and you might get a sensation that you are rushing towards it.  At first you will probably be so startled that your vision will quickly rebound back to normal, but as you get accustomed to this experience, you will learn to appreciate the deeper understanding that comes from it.

Particular symbols (shapes) embedded in the designs stimulate your mind and steer it in the appropriate directions.  These symbols are not easily found (unless you know what you're looking for) but they will help your understanding, anyway.

Searching for them without knowing what they are is a waste of time.  They were intended to be secret (while other symbols are more openly displayed) and they are well-hidden by being incorporated into the images.  The best blend of imagery and symbols is found in the Rider-Waite tarot deck.

For most users, simply knowing that there is more to tarot cards than just pretty pictures should be enough, without turning an exercise or reading into "Where's Waldo".