The Empress Tarot card expands your psychic boundaries if you use for a simple path-working.

The empress tarot card is the best focus for those who are looking to test and expand their psychic powers.  Her number is "three" of the major arcana, and unlike the cards preceding her, she is firmly rooted in the earthly world, protecting and grounding all within her reach.  She is mother nature in a lush, fertile setting (the wheat growing in front of her, the forest behind her and a mountain stream cascading by her side) in high summer.

Comfort and luxury surround her even in the rustic setting.  It is clear that she is cherished and cherishing.

Though her gown conceals it, there is no doubt she is pregnant (the carefully placed cushions at her back hint at it) and even though she looks slight, the ease with which lifts her heavy sceptre, warns that her power is immense.

A heart-shaped shield rests against her stone throne, bearing the Venus symbol (or the Egyptian ankh) a reminder that life and love go together.

The empress tarot card was chosen for this exercise because it is one of the most positive, reassuring and cheerful cards in the deck.  (Psychic development thrives in an atmosphere of optimism.)  You will need the card (Use the Rider Waite tarot deck) a candle and some privacy. 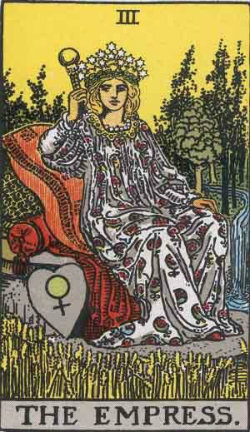 1.  Dim the lights, prop the card up in front of you so that it is at eye-level (at a book-reading distance from you).  Light the candle but position it so that it does not distract your attention from the card.

2.  Sit quietly for a couple of minutes and glance at the card from time to time.  Don't stare at it for any prolonged time; just relax, sit quietly without doing anything in particular.  Listen to the sound of your own breathing.

3.  Close your eyes and picture the empress tarot card growing larger and larger in front of you.  Continue growing it until it is about as large as a projection screen.

4.  You will be walking into this picture now.  Climb over the edge of the card and step into the field of wheat.  At this point do whatever one thing you feel the need to do, and let whatever happens, happen.

5.  After you feel that you have completed whatever small thing that needed doing in the card, you will depart, making sure that you climb out the same way, same place you climbed in.

6.  Shrink the card down to its original size and open your eyes.

7.  Pick up the empress card, slam it face down on the table or shelf and get up and leave it.

8.  Go do some sort of normal physical chore, straightening up your house, doing dishes, feeding the dog or making a pot of coffee- whatever, just move around doing something you normally do.  This is as important to your psychic development as doing the exercise.  In fact, you should think of this phase as part of the actual exercise.

The possibilities involved in this visualization are endless.  Even though the card exists "in the real world" you were the sole creator of the image in your mind, and you were the only person who could see it.

A feeling of exhilaration and even liberation is pretty normal.  Kind of, "If I can do this, I can do anything!"  Its a great feeling, but try not to let it affect your normal life too much, and do not try to share it with others.  If you do, you will lose it, and possibly any progress you have achieved so far.

So, what small thing needed doing in your visualization?

Perhaps you adjusted the pillows on the empress' throne for her?

If you volunteered to do that it definitely says something about your motivation for developing psychic powers.

If she asked you to do that and you complied, it shows that you are willing to do whatever it takes to activate your abilities (and that you follow directions well). 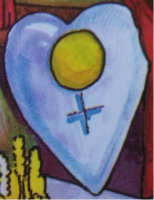 Maybe you noticed her shield was at an angle and you straightened it for her.

This would indicate that you are a perfectionist and that you will pay attention to even the smallest details of your psychic development.  This can be a good thing, but you need to be careful you do not spend too much time obsessing over your psychic life. One of the main lessons that the empress teaches is to stay grounded in your normal life, even while you are learning about a whole new world.

If she spoke to you, remember what she said- write it down.  It may seem nonsensical now, but one day you will grasp the real meaning behind it.

The most important thing is to remember how the experience made you feel, and to recognize that feeling when it happens again (just as when you explore the list of tarot card meanings).

If you have not done the magician tarot card exercise, try it a day or so after this one.  Technically it should be done first, but it will still add to your learning- even if you have mastered this more difficult one.

Yes or No tarot