How Do Tarot Cards Work?

How do tarot cards work to enhance your natural psychic gifts?

It all depends on how you use them and what your expectations are. The first thing you need to understand is, its all you. There is absolutely no outside force involved in Tarot. Whatever you see, comes from you, and you are the only one who can affect what you see.

So, why bother with it, then?

Because most of us don't know what we know.

We know it all (or can access it) but we don't use it. You have everything you need, you honestly do not have to use tarot cards to find things out. But it can illuminate what you already know, without realizing that you do kmow it.

How Do Tarot Cards Work to Illuminate?

The key method tarot cards use is image. Visual symbols and shapes are vital to stimulating psychic insight. These images are what make up the universal language of psychic powers. Words are simply no match for images, no matter how desciptive they are.

Think back to when you were a child, before you were able to read. A parent, or some older person, would read to you from a picture book. The words they were speaking were a lulling background, perhaps you even listened at first. But the main attraction of the stories were the pictures. That was what you focused on. Tarot cards are the same. Your undeveloped psychic instincts are going to hone in on those symbols, to the point where you are not even thinking- you are just feeling.

Tarot cards work by stimulating your awareness of feelings that you never realized you had. "Feelings" or emotions have kind of a no-no connotation in the modern world. People have been steered towards the rational aspects of humanity, rather than the messy, emotional ones. It's just better for a 'civilized" society, and one that's easier to control.

How do tarot cards work with emotions?

So when you look at tarot cards, you probably feel uneasy, but you might translate that feeling to one of disorientation or queeziness. Believe it or not, this is actually a good sign. If you felt nothing, it would be more difficult for you to get something of value from a tarot reading.

The feelings that tarot cards inspire is just different enough from the other feelings you have in your daily life, so that you can notice the difference (and recognize it  when you feel them again). Eventually you will come to expect these feelings when you are doing psychic work, which in turn makes it easier to receive revelations.

So, how do tarot cards work?

The cards work by awakening symbols that are buried deep within your psyche. They then pop up to your clear-thinking, daily grind, rational, relentlessly logical mind. As they do this, they bring emotional content with them that is disturbing to that rational part of you (because it sees no logical reason for those feelings). Emotional reactions to the tarot cards are the main sign that these symbols are awakening your psychic powers.

How do tarot cards work through  symbols?

When you look at tarot cards, you see a glare of signs, shapes, symbols, flowers, weapons, bodies, animals, monsters, angels, suns, moons and stars. It is overwhelming. There are patterns in the madness, though, even if you are not aware of them.

Each tarot card is more than one 'picture'. So many symbols/pictures are packed into one card that it is equivalent to a multi-volume book series. Your eyes cannot process all the information that is available, so they seize on a couple of details (while your logical brain convinces itself that it has 'seen' the whole picture).

How do tarot cards work with your mind?

They actually 'work' in much the same way as modern advertising. Have you ever discussed a purchase before you even searched for the item, i.e., "I'm thinking of buying a new __. What do you think?" Then when you open your phone or computer, you're hit with all these advertisements for the exact product you were going to look up. You are then convinced that your devices are spying on you.

This happens to everyone. Nothing is spying on you or reading your mind, though. What has happened is that you saw those very same advertisements hours ago, but you never noticed them. In fact, those first ads are what probably got you to thinking about buying a product in the first place.

And that kind of manipulation should be way scarier than tarot cards.

How do tarot cards work through psychic symbols?

Tarot symbols are overlaid and overlapping. Literally, every brush stroke is a symbol, part of a symbol and part of multiple (maybe infinite) symbols.

Take the two of swords, for instance: 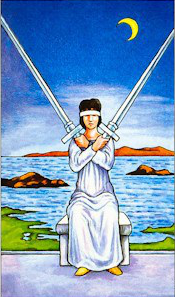 This seems like a very simple image. There's only one figure in it, there are no objects in the foreground and it has a bare landscape for background.

The swords are quite dramatic, taking up about half the image, so its no wonder that anyone might ignore the rest of the image.

Without telling you the meaning of any possible symbols, I would like to point out that the sea has an enormous number of ripples. there are numerous folds and creases in the lady's gown, the cloud formations are very detailed, the shadows on the ground have intricate shapes, the edges of the green, land/sea border remind me of a map (for some reason), the sun and shadow interplay on the rocks is interesting, and the yellow crescent moon is the exact shade of the color of the lady's shoes (which are placed in an arc that echoes the moon above.

And those swords! Isn't it interesting that the points or ends of the swords are not visible in the picture. One might say they extend to infinity.

And while this image does a really good job of looking three-dimensional, it doesn't hurt to remind ourselves that a picture is really two-dimensional. This enables us to see that the figure (even though it seems at first glance to be feminine, there are details that could contradict this) cuts through all four elements: air, water, earth and fire. Where's the fire?  Just look at the color of the distant land.

How do tarot cards work...color symbols

Colors are also symbols in tarot cards. Pay particulor attention to the shade of backgrounds or sky. You can also see that the same exact shade is used in more than one card. There is enough variation in color between cards with similar backgrounds, so you can be certain that when a couple of them are exactly the same, there is a relationship between those tarot cards. 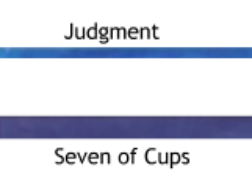 The two of swords has a background sky that has more than one shade.

These are tarot cards that each have part of the same background sky color as the two of swords.

One way that tarot cards work to illuminate messages in our psyche is to remind us of certain things. If...the sky in the two of swords struck you, and you thought to yourself, "Where have I seen that color sky before?" - well you are most of the way to part of an answer.

Categorizing tarot cards by grouping those with similar symbols together to tease a meaningful message out of tarot, is by no means a surefire proposition. But if doing something similar occurs to you out of the blue, there is probably a message there you are meant to see.

Bottom line- There is no one "system" that can completely answer the question, how do tarot cards work? The symbols that you are meant to see will jump out at you, one way or another. Don't go searching for clues; let them come to you as they are supposed to.

How do Tarot Cards Work for Psychic Powers