The magician tarot card is the beginning for those who want to focus on developing their psychic powers.  His number is "one" in the major arcana; the preceding card was "zero".  He has begun to create something out of nothing.  He has gathered all the elemental forces he needs (earth, wind, fire, and water) as represented by the tools on his table, the four suits of the tarot.

This card begins with the magician's action of bridging the gap between the ordinary world and the world of thought.

This is shown by the one hand pointing upwards and the other pointing downwards.  This action is permanent, forever allowing anyone to access both realms if they desire (note the infinity symbol above his head).

The mingling of the two worlds is also shown by the red and white (sacred and profane) color scheme:  the intertwined flowers and the magician's clothing. 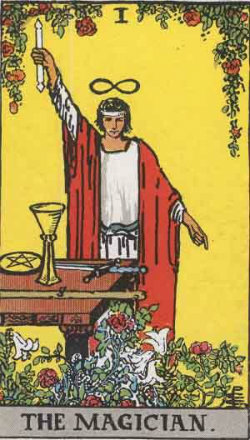 1.  Separate the magician tarot card from the others in the deck.

3.  Notice what you "feel" when you look at it.  All tarot cards are stimulating, but in a different way than looking at images on t.v. for instance.

4.  Take the card and put it some place propped up where you will see it frequently.  Leave it there for three days.  Just notice it when it catches your eye; there's no need to study it.

And that's it.  Don't be disappointed by the simplicity of these instructions.  There is a magical process going on in your subconscious mind (that you may or may not become aware of).  And even though you'll only be looking at the tarot card for a few seconds each day, it is compressed visual learning, roughly like a REM dream.

Return to this page (you can bookmark it by pressing ctrl+d) on the fourth day.  If you read on to the next exercise now, results might not be the best.

The preliminary exercise was designed to stimulate your imagination (an integral part of your psychic powers) from the outside.  Now you will do the visual work from the inside.

2.  When you feel you are ready, put the card face down.

3.  Close your eyes and see the card.  (By now, the picture should leap to your mind at the mere thought of it.)

4.  Make the magician move!  One movement only!

6.  Record what movement he made in your psychic journal.  Reflect on this movement; it will tell you a lot about yourself- your needs, wants, desires, motivations, and your actions to accomplish these things.

Whenever you are doing visualization work, make sure you return things to the way they were, preferably by retracing the direction you took to accomplish it.

So, how did he move for you?  If you are like most people, he did something with this arm, perhaps lowered it in one quick, decisive gesture.  Or maybe he touched his wand to one of the symbols on the table.  Or perhaps he shot a lightning bolt at one of the flowers.

If he moved a different part of his body, that's ok too.  But it's worth thinking about to understand how the symbolism of the magician tarot card affected you.  Because this tells you how you will approach this work, and which things will work best for your psychic development.

Congratulations on a Big Psychic Step!

You did it; you made him move.  That's a huge accomplishment.

"Wait a minute," you are probably thinking, "He didn't really move.  It was all in my mind."

And who is to say that is not just as real as the "real" world?  If you cannot make something happen in your imagination, you will never make it happen in the "real" world.  This is the first step towards doing just that. The magician tarot card shows you that magic is everywhere, just waiting to be used.


These exercises use the magician's card from the Rider Waite tarot deck. Another deck will have a different picture and the results may not be the same.

Do continue to work on your own list of tarot card meanings to stimulate your own psychic growth. Tarot cards are more than fortune-telling devices. They are teaching and learning tools.